The Mini Monstera, an exciting new tropical species with big aspirations in a little(ish) package.

Named (probably in part due to its botanical name Rhaphidophora tetrasperma being such a mouthful to say) for the characteristic fenestration it shares with many of the popular Monstera plants.

I mean, I certainly see the appeal.

To get the classic split-leaf look of a Monstera deliciosa in a delicate vine package is a real treat for the home, and the smaller leaves and stature make it a wonderful candidate for a terrarium life.

In fact, the shape and growth habit of Rhaphidophora tetrasperma (pronounced [ra-fid-o-FOR-a]) make it a really versatile plant.

Read on to find out how to get the best out of it!

What is Rhaphidophora tetrasperma? (The Mini Monstera Explained… Simply)

We get it, it’s not uncommon for a plant to be called by the wrong name or to be misclassified at first, but the Rhaphidophora tetrasperma is the victim of quite the identify crisis.

Often referred to by the names of plants of several different genera; “Ginny Philodendron” and “Piccolo Philodendron” are probably the worst offenders.

At least “Mini Monstera” is catchy…

Regardless of the name mix-up, this plant is one of the hottest new Aroid species hit in the community.

With gorgeous, deeply-split leaves of just 6′ in size (vs the possible 35′ of the M. deliciosa!), this plant is essentially the miniature Asian version of its namesake Monstera.

But, it is in fact part of a completely different genus – Rhaphidophora.

Where this plant really differs is in its growth pattern.

Rhaphidophora tetrasperma is an aggressive vining species, and to get the most out of it you’re going to need to give it something to climb.

Whether that’s a moss pole, a trellis or a terrarium branch/background – this baby loves to climb.

Whilst the smaller scale of this plant does lend itself to terrariums over its larger cousins, it’s important to note that this is a rapid grower and will likely need a) a larger terrarium container and b) regular trimming.

See the links below to purchase from reputable terrarium plant shops and marketplaces (may include affiliate links).

In its native environments of Malaysia and Thailand, you’d primarily see Rhaphidophora tetrasperma snaking its way up trees and around branches.

So, you’d expect it to receive dappled sunlight through the canopy as the Sun passes across the sky.

In the home, this means this beautiful plant will do best in bright indirect light conditions, but it’ll also handle small periods of direct sunlight too – just don’t overdo it or you’ll risk scorching the delicate leaves.

The Mini Monstera can also tolerate lower light levels to some degree, but not without stunted growth and probably some leaf discolouration. Using a grow light is best if you’re placing your plant or terrarium in particularly shady spot.

Like most tropical species, Rhaphidophora tetrasperma thrives in consistent, even moisture.

As an indoor plant, it’ll appreciate regular waterings, as long as you’re not completely saturating your growing media for long periods of time.

Thankfully, the Mini Monstera is a very forgiving plant, and it’ll be able to handle most watering discrepencies without raising too much of a fuss. It’s also pretty drought tolerant overall (botanical speak for forgetting to water for a few days or so).

In a closed terrarium setting, it’s even easier to keep this beautiful vine happy by maintaining an even water balance.

Like most other members of the Aroid family, this plant thrives in a moist environment, but can be affected by waterlogged soil and root rot.

The easiest way to mitigate this is always through a well-draining substrate high in orchid bark, sand, perlite, or another additive that encourages aeration.

An ABG mix is a tried-and-tested substrate that’s great for tropical plants.

As an aggressive grower (especially in Summer) Rhaphidophora tetrasperma can hog some of the nutrients in the soil, so if you have this in a terrarium keep an eye on the health of your other plants that it shares a space with – you may need to fertilize a little.

Mini Monstera plants prefer conditions that mimics the warm (even hot) temperatures and high humidity levels of its natural environment.

For these reasons, it will absolutely thrive in a tropical terrarium climate.

That being said, these plants still grow plenty well under regular household conditions too. Anything above 55°F and 50% humidity is going to work.

If you can add a humidifier and can keep them away from extremes of temperatures (e.g. cold or hot drafts) you’ll be sweet.

In their juvenile form, Rhaphidophora tetrasperma start without their characteristic split leaves – so don’t worry if your baby plant doesn’t look like you expected!

As this plant grows older and taller, the splits and holes on its leaves become more prominent as the leaves also grow slightly in size, though it’s uncommon for the leaves to get larger than six inches (15 cm).

This plant is well known for its love of vining and is frequently seen climbing up trellises, sphagnum moss poles, and walls; using its aerial roots to attach itself to whatever structure it can find.

Besides the fact these vines really need to climb in order to grow, I did find the root structure to be particularly sensitive when I first re-potted mine – so I think it’s important that it has some support.

It could have just been my plant, but almost all the roots connected at a single easily-broken point.

So, take care when you’re planting these up.

I haven’t had the pleasure of having one of these in a terrarium – as I’ve yet to own a container large enough – but I’d be interested to see if they adapt to an enclosed space.

Either way, I’d be prepared to trim regularly to keep the Mini Monstera in check!

While this plant shares its common name with the eternally popular Monstera deliciosa, the Mini Monstera also shares a similar preference to propagation by the same stem cutting process, too.

The nodes grow prominently on both species, so as long as one leaf node is included in the cutting you take, both hydroponic and semi-hydroponic methods work wonders to help you produce another plant for another future terrarium!

For obvious reasons, the Rhaphidophora tetrasperma is often confused and misclassified as a member of the Monstera or Philodendron genus because it’s also an Aroid that shares many similarities at first glance.

If you’re looking for similar plants, you need not look further than the Monstera adansonii – another vining species with pronounced fenestrations.

Or within the genus, Rhaphidophora decursiva is another gorgeous split leaf climber.

There is a variegated variety that goes by the self-evident name of Rhaphidophora tetrasperma ‘Variagata’, but the consensus appears to be that this is not a natural nor stable variety. So, I guess it’s important to do your research.

But then, variegated versions sell for thousands of dollars so who am I to judge?

The Mini Monstera is probably going to need a not-so-mini terrarium container to be able to really let loose, so it’ll do well with other larger species that it’s not going to immediately out-compete.

It’s also going to pair well with other moisture-loving tropical species like ferns.

This may sound like a generic answer to the interview question “what’s your biggest weakness,” but the Rhaphidophora tetrasperma has a problem with growing too much.

In the warm, growing season, it is not unlikely for a plant parent of this particular Aroid to be forced to open their terrarium to prune and take stem cuttings from this plant often.

Of all the problems to have, it is certainly far from the worst!

Why do the leaves of my Rhaphidophora tetrasperma have brown tips?

Brown leaf tips can be an indicator of a variety of issues, but it’s typically due to watering irregularities or over-fertilizing (sometimes called fertilizer burn.

Why are the leaves of my Rhaphidophora tetrasperma not splitting?

Juvenile Rhaphidophora tetrasperma plants don’t develop fenestrations till they reach a certain level of maturity, so it’s normal for baby plants to not have split leaves. If your mature plant still isn’t producing split leaves, it’s likely due to a lack of sunlight. Move your plant to a brighter spot in the home.

Why does my Mini Monstera have yellow leaves?

Yellowing leaves is typically a sign of overwatering, so I’d recommend allowing your Mini Monstera more time to dry out between waterings, or reduce the amount of water in the system if planted in a terrarium. 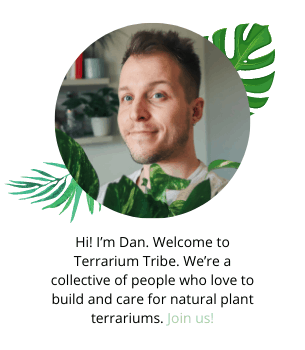